ALL MY HOPES AND DREAMS--rerelease Western Historical Romance 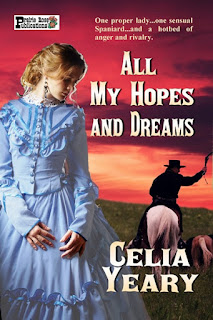 ALL MY HOPES AND DREAMS


To escape an arranged marriage, beautiful, proper Cynthia Harrington from East Texas impulsively marries Ricardo Romero, a striking, sensual Spaniard who ranches on the far western edge of the Texas frontier. Innocently, she steps into a hotbed of anger, rivalry, and strong wills. As she struggles to gain a foothold in the hostile household and foreign ranch community, she finds that her biggest challenge is to make her husband love her.


Ricardo creates his own problems by marrying an outsider, angering his mother, father, and his jealous ex-lady friend. Then, the Texas Rangers arrive looking for a killer, and Cynthia saves Ricardo’s mother in a confrontation with the wanted man. Ricardo realizes that his delicate bride has more grit and spunk than he thought, and his greatest trial becomes a race to pursue his own wife and persuade her to stay with him.


EXCERPT:
While he waited in the parlor, Ricardo thought through his plan once more. Was this the right thing to do? His schedule was to leave for home in three days. Would that be enough time? He paced back and forth in front of the large front window, hoping Mr. Harrington would not come home. All he needed to do was convince Cynthia to marry him, and he believed he could.
He heard her approach and spun on his heels. There she was, pale but beautiful, sad but strong.
“Cynthia?”
“What are you doing here?” She cocked her head to one side. She looked like she’d been crying sometime during the previous hours.
“Will you sit here beside me?” He swept his arm toward the love seat.
She sat and he joined her. “Cynthia, I have news. And I have a proposition. Will you hear me out?”


Turning slightly toward him, she leaned forward in curiosity. “What do you want, Ricardo?”


“I want to ask you to marry me. Three days from now, if you will.”


She gasped and pulled back. “What?”


“I ask for your hand in marriage.” He studied her light blue eyes, so wide with surprise. She had not turned from him yet. “The marriage proposal you received yesterday will be retracted soon, before the afternoon is over, I’m certain. So, I ask you to marry me instead, but not a month from now—in three days.”


“Why three days?” she asked. “And how do you know Harris will retract his proposal?”


He almost laughed. She asked why so soon, not why on earth he would ask in the first place.


“Believe me; Harris Newton does not want to marry you.”


“He will retract his proposal because you were out on the road with me all night.”


“Well, then, why should I marry you in three days?”


This was a good sign, a good sign, indeed. “Because I’m going home, and I want you to go with me—as my bride. Will you, Cynthia? Will you marry me?”


She was speechless, but she did not reject him out of hand. After some moments of heavy silence, she asked. “Where exactly do you live?”


He breathed a sigh of relief. “West of San Antonio, on a very large ranch.”


“Why were you here in Nacogdoches? I’ve often wondered.”


“To buy blooded mares to add to our herd.”


“My father. He and I ranch together on property that has been in his family for generations. He and my mother live there, but it’s a very large house, and an enormous operation. It takes all of us and many vaqueros to keep things going. My father is aging, so I am mostly in charge.”


“A ranch? I know nothing of ranching or the West. I would like to live in a city. But you live…”


“Not far from San Antonio,” he hastened to say. “But it is far enough away that we only go twice a year for a holiday.”


She lowered her head and looked at her hands. “I don’t know. That seems far out of my realm of expertise. I’m not certain I could do that.”


“Answer this, Cynthia. Would you rather live here until your father finds another husband for you, or would you rather make your own decision? I’m giving you a choice.”


At that moment, they heard heavy, hurried footsteps on the porch. Both knew it was the master of the house. Ricardo gathered Cynthia into his arms. He turned her just so, placed his lips on her soft, feminine ones, and kissed her with all the passion he could muster. For good measure, he moved his hand to one breast. Instead of fighting, she responded as though she hadn’t heard her father.


“Cynthia Louise Harrington! What the devil are you up to?”


Ricardo and Cynthia pulled back, but they did not jerk apart. Instead, they gazed into each other’s eyes and parted slowly. Without caring if the man was in the room or not, Ricardo placed his palm on her cheek, and kissed her on the other, ever so sweetly and gently. Before he let her go, he whispered, “Will you marry me?”


She nodded and whispered in return, “Yes, I will marry you.”