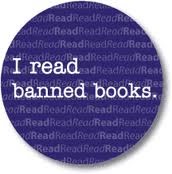 Conversations about banned books have been prominent on FaceBook this week. The topic always interests me. Who has the right to ban or censor reading material for another? I realize the words have different meanings, but in reality they result in the same thing: one person or institution placing limitations on the reading material for another person.
This is just not the American way!

The Texas prison system routinely censors all reading material for inmates. What do the officials look for? Anything that promotes or describes explicit sexuality, plans for escape, extreme violence, or fighting tactics is placed on a banned list. This might be well and good, but the topic only interested me because none of us is completely exempt from censorship sometime in our lives. 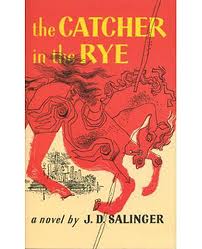 J. D. Salinger wrote in such a way his most famous book became the focus of censorship. I thought about his one great success, the book Catcher in the Rye, published in 1951. I was a young girl at the time, so I probably did not pay attention to the release of this novel. As I grew up, though, I learned groups had challenged and censored it many times. Why? It contained profanity, sexuality, and teenage angst. While he wrote it as an adult novel, what do you suppose teenagers did? They sought out the book whenever possible. As a teen, I knew not to touch that book. I never read it. I should, though.

Gustave Flaubert wrote Madame Bovary in 1857. The novel contained adulterous affairs and obscenities. I knew about the book but did not read it until I was in my thirties. Even then, I timidly read it, hoping no one would discover my little secret. I liked it, even though it was rather depressing and dreary.

Even comic books have landed on a censored list. As a child in the third grade, my parents forbid me to read horrid comic books. They allowed Archie comics, Little Lulu, and Casper the Friendly Ghost, but nothing bad. Truthfully? I didn't know bad ones existed. But I played with a classmate—a boy—who lived down the block. Guess what he had under his bed? A big flat box filled with comic books about crime and horror. I read and saw the graphics depicting murder, gore, severed heads, cannibalism, and torture. I wonder if his parents knew he had them. If not, where did a nine-year-old obtain enough money to buy these—and where did he find them? I'll never know, but I do know I never wanted to see them again. I am a real scaredy cat.

As a teenage girl, my mother told me never to read romance magazines. I didn't know about those, either. One of my girlfriends did, though, the one who was just a little different from the rest of us in my little "crowd." She read Modern Romance, Secrets, and Revealing Romances. I went through a time in which she'd bring a couple to school, hand them over to me, and I'd stuff them in my thick, leather zippered notebook to take home. I soon became bored with them.

Certainly, we need to protect our children and grandchildren. I wouldn't have wanted my children reading some of the things I did, either, but probably they did and I never found out. And you know? They…and I…turned out to be worthwhile adults without any serious psychological problems. I've often wondered—should we allow any person to read whatever he could understand? No matter the content? For myself, I have always censored certain literature, movies, and music. Why? Because of my personal preferences—not moral standards particularly. I really don't care about the reading material of others, as long as it doesn't affect me personally.

Censorship will always be with us.